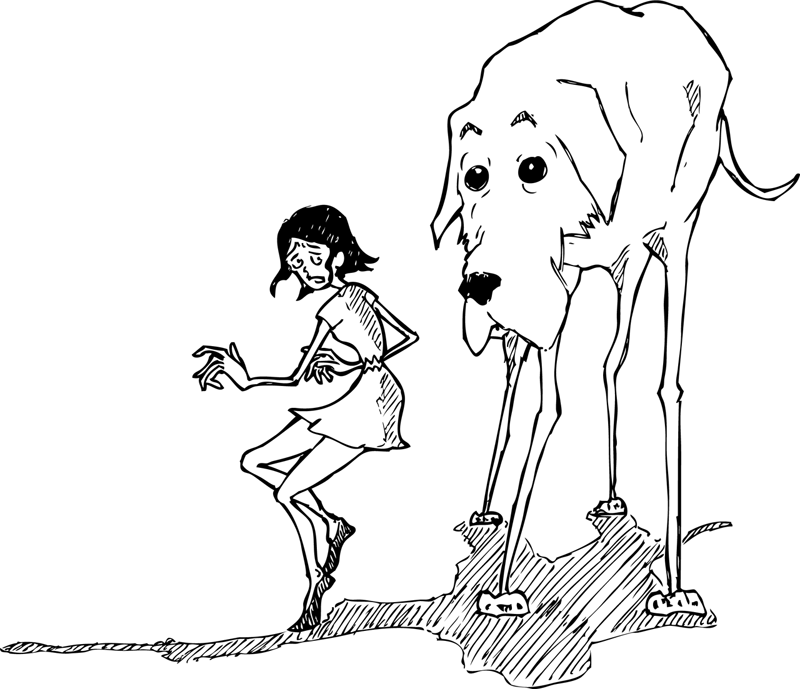 I’m afraid of dogs.   Yes, even the puppy kind.  My cowardice knows no prejudice for cuteness.  It started when I was invited to a BBQ party at my friend Jerq’s (sometimes pronounced ‘düsh bæg’).

“Annnnd, we’re here.”  My boyfriend announced as if I couldn’t solve the mystery while parking the car.  I guess he could have been sounding a warning.  He’s never been articulate with fretful foreshadowing.

We arrived and the house was phat.  I expected Snoop to greet us and provide a pauper pimp’n tour of the crib.  Facing the post-modern mansion had me wondering if I’d have to start speaking with British class.  I’m awkward enough that I could probably get away with it.

Walking into a new social setting is nerve racking enough as it is sans canine.  What do I talk about?  What should I bring?  I wanted to make a good impression, so I whipped up a batch of Jedi and Sith cupcakes.  I would have baked a dozen Yodas also, but I didn’t want to look like I was trying too hard.  My last imperial fleet of cookie clones screamed of desperation.  Anyways, I digress.

I boldly marched towards the battle cries, making my way into socializing the ordinary BBQ party.  And then, I saw it…a small black guinea pig of a dog.  Its fur looked freshly electrocuted and its eyes charmed thoughtlessly as it pranced in circles around its tail.

Jerq kneeled over and affectionately patted the dog without interrupting its attention deficit disorder.  The dog and I seemed to have a lot in common.

“This is Pepper.  Pepper, this is Alice.  Say Hiyee Pepper!”  He was kindly making our acquaintance.
“Ummm.  Hi?”

Why do dog owners always introduce their pets like I’m meeting their nephew at a wedding?  Do I shake its paw?  Or do I sniff its butt?  I never know the proper response in these situations.

“You like dogs?”  Jerq asked noticing my reticence.  Despite his greased hair and fondness for parking luxury sports cars in handicap spaces, Jerq was always welcoming towards acquaintances.  But Pepper glared at me as if she caught me flirting with her husband bare-breasted.

“Never had one.”  I calmly replied with scenes of Cujo storming my imagination.
“Pet her.”  He smiled sincerely.
“Can I put these cupcakes somewhere?  My arms hurt.”

I walked away into the kitchen and added my tray to the pile.  Everyone contributed so many delicious looking foods to the feast.  On one side were rows of ribs, burgers, bacon-wrapped hot dogs, and other carnivorous delights.  The line continued with baked potatoes, mac and cheese, corn on the cob, and even fresh tossed salad for the weak.  I brought Star Wars cupcakes.  It looked like I was fitting in smashingly… 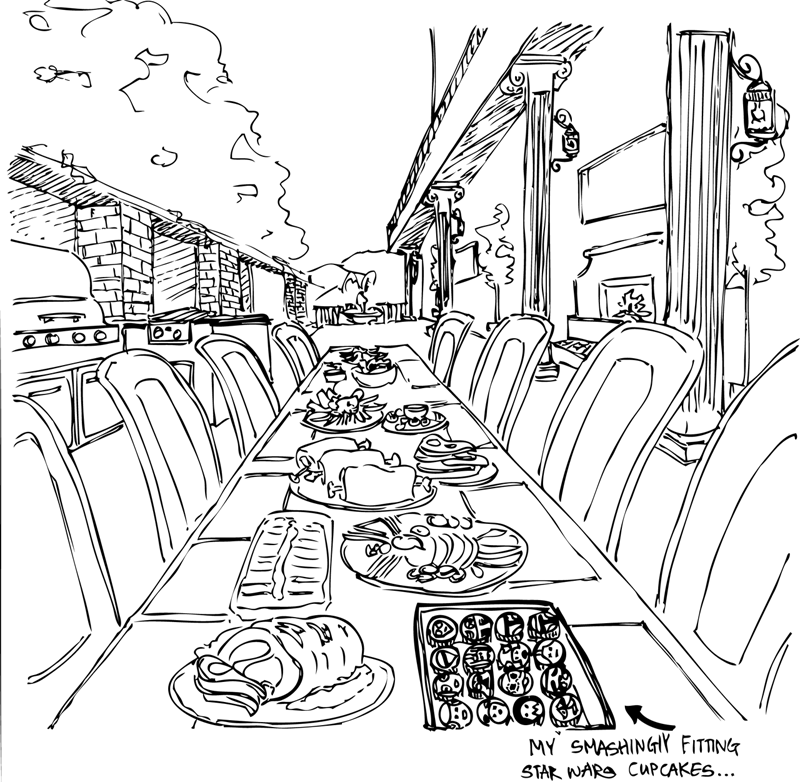 Did I mention that Jerq is rich?  His kitchen was so luxuriously spacious and modern that cows could brag in heaven about where their hides were seared.  I wandered aimlessly coveting his walk-in oven, then I froze.  I found a big ass dog.  Huge.  This dog was bigger than George Lucas’ ice cream money.

I stood there like an old west gunslinger.  It was me versus the alpha dog.  The pee dripping down to my knees was telling my legs that I needed to sneak out of there.  I tip-toed away cautiously.  Social intimidation was clearly the safer place for my life.

Even with all of my grace set to its peak, I was doomed by the land-mines of doggy toys.  There were sprawls of bones, balls, and dolls complicating my exit.  I Black Swan’d passed it all.  I pliéd et en arrièred…then I squeaked.

My cover was blown.  I backed onto a tiny football that chirped obnoxiously when squeezed.  The big ass dog perked its big ass head in full alert of my direction.  In a fit of panic, I quickly kicked the football.  The beast’s carnal instincts got incited and it darted off towards the squeaking bounces down the hall.  I’ve never seen anything so huge move so swiftly.

Before I could even finish a sigh of relief, the dog ran back towards me…trumpeting squeaks of a successful fetch.  It backed me into a corner.  Pinned into a state of helplessness, I desperately Ray Finkle’d the football a couple more times.  But, the dog kept coming back.  It was relentless.

Jerq handed me a sausage link.  He smiled while oblivious of my horrid state.  I trembled uncontrollably and put my arm out hesitantly wagging the sausage.  Smalls‘ thick drool slowly recessed towards the corners of her mouth as she grinned in delight.  She lunged dopily, engulfed the sausage, bit my finger, and swallowed my dignity.

Blood sprayed everywhere as the dog’s fangs unclasped my fingers.  It could have been a murder scene straight out of Dexter.  In my mind, I was screaming bloody murder as if I woke up in bed next to a dead horse.

“OH SHI-, you ok?!”  Jerq inspected my hand with a clear expression of guilt.
“Owie.”  Pain brings out the 3 year old in me.  Don’t judge.
“Bad Smalls!”  He scolded.  The dog sunk its head with a sullen brow and began looking for a dark bridge it could leap off of.

Our commotion drew the party around me like a curious convey of meerkats in a manor.

Everyone looked concerned and slowed their chewing of juicy pork ribs and hamburgers.  As they took turns asking me if I was okay, the occasional chewed up fly-away peppered my already embarrassed face.  At least the corn stuck to everyone’s teeth gave me a few chuckles.

My boyfriend casually walked into the room after the commotion settled.  His eyes happily brightened while noticing me being the center of the party.

“Duuuuddee.  These cupcakes are amazing.”  My boyfriend’s a smart guy…but when he eats, the blood abandons his brain for his stomach.  He could be knee deep in rotting lizard heads and not even notice as long as his sandwich was good enough.  “Whoa, you alright babe?”  He finally put it all together. 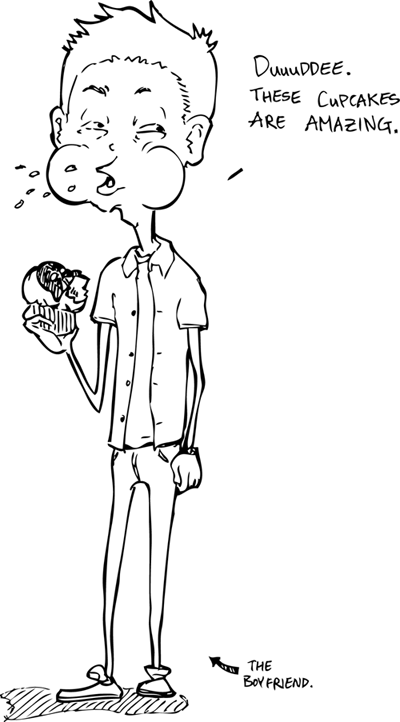 “Yea.”  The sting in my fingers subsided and all I was left with was the humiliation.  It’s common for my dignity to escape me.  This was one of my finer moments.  I looked around the room and just giggled.

“Sorry.  I should’ve helped you.”  My boyfriend stated thoughtfully.  “But babe, your cupcakes…A-MAZING!”

The silver lining from my dog trauma is that now I have great friends.  Everyone stood by me despite my cowardice and penchant for misfortune.  I couldn’t ask for better friends.  They also buy me tons of dog toys for my birthday.  Assholes.

The Staircase Wit is a term used to describe thinking of the right, or clever, response when it’s too late.  I’m always late with a comeback.

We hope to bring you tons of entertaining stories!